From the high seas 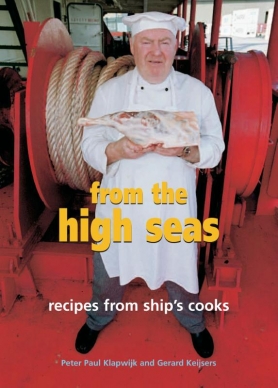 For as long as anyone can remember ports have been the focal point of many cultures. Ships from all over the world dock in their harbours. What's it like to be on board those ships though? And what does the world look like when seen from the galley? In From the High Seas one of the ship's main characters speaks: the cook. The man - sometimes woman - who keeps the crew's spirits high with his culinary skills.

Forty cooks from all over the world - from China to Brasil and from South Africa to Poland - give their favourite spirit-lifting recipes in this book. The recipes are from their birthplaces and are meant for groups of ten to twenty people. Just as it would be on board. And every cook unveils the personal story behind the recipe.

From the High Seas is more than a just a cookbook. Alongside each recipe, there is a 'tall story' about the sea. The cooks not only tell exciting anecdotes, they also tell about the harsh reality on board because even ship's cooks feel homesick from time to time.

The interviews are by the journalist Gerard Keijsers. Photographer Peter Paul Klapwijk created colourful and unforgettable portraits of every cook on or near his ship, with an ingredient featured in their favourite recipe.

Apart from the recipes and stories, From the High Seas also provides an impression of the work going on in the world's biggest port: Rotterdam. In those black and white pictures you can 'taste' the unique atmosphere of the warehouse, quay and sea. In the eighteen months since publication, 19000 copies of this book have been sold in the Netherlands. From the High Seas got excellent reviews in Dutch newspapers and magazines.

Do you want to know more about Peter Paul? Visit https://www.instagram.com/ppkhm/ or read this article on In de hekken: https://www.indehekken.net/in-de-lens-peter-paul-klapwijk-duizendpoot-en-mensenmens/